The Miracle of the Gulls

Seagull sex. There was loads of it going on as winter turned to spring. I can’t really claim to have ever given much thought to the existence of birds – certainly not Britain’s most ubiquitous coastal avian – but the sheer amount of “activity” occurring right outside my window demanded attention.

Last September I moved into a new flat with my partner. It happens to be four stories high, which means we look out over the river and much of the town. It also means we’re high enough to see a lot of bird goings-on. Gulls, crows and pigeons rule the roosts around these parts, existing in relative harmony. And spring, of course, is mating season. Sure enough, a few rudimentary nests began appearing on the rooftops surrounding us. My office afforded a prime view of three just across the street.

Now, I have to admit that when it comes to animals I’m a bit of a sap.* I don’t claim to have liked seagulls previously, but I also couldn’t help but become intrigued as I watched prospective mother and father gulls taking turns to sit upon their nests. And sure enough, by April those nests were filled with chicks. Tiny little fluffballs, their cheeps barely audible.

Now, I’m not writing this as some sort of gull evangelist. I could pile on fact like –

I could bore you with all that, but the purpose of this is less of an RSPCA advertisement more to pay tribute to those fluffy little fighters. For the last three months I’ve watched four different groups of chicks endure all manner of struggles. From west to north there a pair we call “The Chicks”, one on a church steeple dubbed Tower Chick, one on the street corner called Corner Chick or Shy Chick (it hid a lot in the roof weeds) and one particularly big specimen named Big Chick. At first, occupying small ledges on the roofs around about, they were so small it looked as though a gust of wind might blow them to their deaths far below. Their parents took turns guarding and feeding them. They huddled together during a thunderstorm and endured rain followed by May and June heat, unprotected and exposed on their promontories.

After a month or so they acquired a more gangly, teenage-esq appearance, with long skinny legs and hunched shoulders. They began to mob their parents whenever they appeared, demanding food with faint, high cries and furious head-bobbing motions.

They also began to move around alot. That’s when the danger of perishing from exposure was replaced by the danger of perishing from mishaps. Seemingly without fear, they started traversing the sloping, somewhat unstable rooftops around them, exploring. There were repeated falls, saved only by the fact that most of the roofs have wooden boards above their guttering to stop snow cascading down onto the street during winter. These same boards caught at least one of The Chicks over a dozen times in one day. It would try to traverse the slope, invariably slip, and slide all the way to the bottom with its small wings splayed.

How they survived I have no idea – beyond, of course, the attentiveness of their parents in feeding and protecting them. At one point a number of crows mobbed The Chicks (crows, clever beasts that they are, nest inside the abandoned chimneys, rather than out on the ledges), but were swiftly put to flight.

About three months have passed since the first hatchings. The chicks, now as big as the adults and with their wings almost fully developed, recently started beating them excitedly, clearly eager to emulate their parents. Now they can fly, a fact actually celebrated by their parents with whooping shrieks. They come and go from the ledges where they were born, periodically joining a nursery flock of about 20 hatchlings that congregate down at the riverside. With this larger group, overlooked by a few of the parents, they are beginning to learn how to hunt and swim. They have quite literally flown the nest.

One thing’s for sure – I think we’ll have moved out of this flat by next spring. I’m not sure I can watch another generation of rooftop endurance games.

Below: some terribly grainy photos of the Progress of The Chicks. 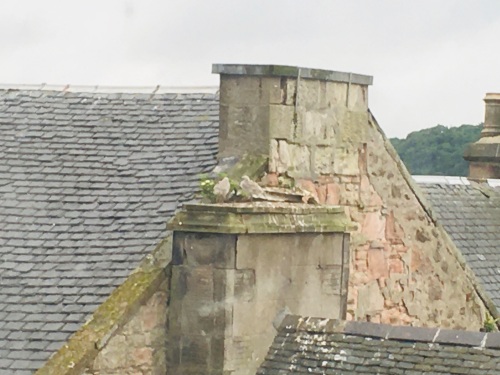 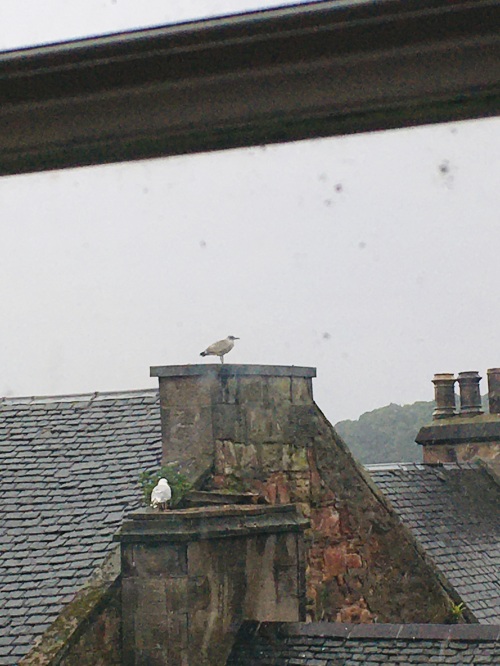 *In order to catch a mouse in my uni flat I once sat up in the dark with an upturned bin, a pole normally used for window-shutter opening, and a half-eaten pot of Dominos garlic dipping sauce (the bait). I duly caught the little creature, but then became so distraught at its own apparent distress that I named it Percy and let it go.