The 3rd episode of the final season of Game of Thrones aired last weekend amidst, it seems, equal parts acclaim and opprobrium. Armchair generals the world over saw an opportunity to tear into what is, quite honestly, a classic example of unrealistic, Hollywood-esq fantasy medieval fighting. The battle of Winterfell saw our plucky ensemble of living characters successfully resist a horde of zombies commanded by the undead revenant known as the Night King. A flurry of articles have since appeared listing the common-sense faults involved in the defence of the seat of House Stark. While the majority of the criticisms are very valid indeed, I thought I’d perhaps play devil’s advocate with a few. While I rarely need an excuse to get pedantic when it comes to depictions of warfare in sci-fi and fantasy settings (hello battle of Hoth), I thought reiterating the episode’s big faults while offering up a few things they actually got (sorta, kinda) right might give everyone a bit of perspective.

Without further ado, let’s look once again at the biggest failings in the defence of Winterfell, as well as a few of the things its garrison got right.

Sick of having mouths to feed in the impoverished, frozen North? Unable to handle another bout of squalling and nagging from your poxed relatives? Just seal your wife and kids in the depths of a crypt in the presence of an all-powerful necromancer!

Seriously, regardless of the military SNAFUs committed by our heroes throughout the rest of the episode, the decision to relegate the civilians to the “safety” of the crypts in Winterfell was honestly the most annoying mistake. We have here a gathering of the most worldly and intelligent people in the whole of Westeros, including multiple royal advisers, battle-hardened knights and members of the Night’s Watch. The Night King’s ability to effortlessly reanimate the dead is well-known to all of them, and yet not one of them thought “maybe the crypts full of dead people aren’t the safest place to be?”

Riposte: I’ve not read the books (fake fan, I know), but someone has previously told me that the Starks are interred beneath heavy northern-made longswords that are supposed to stop necromantic resurrection. Also, given they’re the premier Northern family, you’d think there’d be at least some tradition of cremating the dead. Lastly, it did appear that most of the tombs in the crypt were made of stone. The ability of the undead to burrow through stone using just their desiccated fingertips never ceases to amaze me, regardless of the film of genre. But hey, maybe it was “magic.” Given all these factors, none of which appear to have come into play, perhaps we can relegate the decision to seal the helpless families (without a single guard!) beneath Winterfell from the status of “really stupid” as to just “ stupid.”

My girlfriend was the slightly nonplussed recipient of this quote the moment we saw the Dothraki open the battle with a headlong unsupported charge into the undead horde. Anyone who knows of the battle of Waterloo or who has seen the 1970s epic screen adaptation will understand that you don’t send the cavalry forward without infantry support. That becomes even truer when you’re fighting zombies. It’s even more astonishing to think that, prior to the surprise arrival of the Red Priestess, the Dothraki were apparently totally fine with charging the undead without even the benefit of flaming weapons. Seriously, just which Dothraki chieftain was at the council of war when the others said “let’s kick things off by sending all of the Dothraki in on their own.” And he was just like, “sounds like a plan to me!” Seriously?

Riposte: I’ve seen a lot of comments about using the cavalry to flank the undead, some citing the Rohirrim in Return of the King. Interestingly, while glorious-looking, Theoden’s charge in that film isn’t necessarily much more accurate (they do so into a fairly well-formed, and incredibly dense, wall of orcish spears, which should really spell their doom. At least in The Two Towers Gandalf pulls a light trick to invalidate the Uruk Hai pikes). There’s also the fact that flanking, while a far more valid use of cavalry, isn’t really an effective option when the enemy is so numerous that the concept of “flanks” barely even exists. A flank attack is most effective because it brings great force to bear against a small portion of the enemy army, and can incite a great deal of panic, but these aren’t a factor when the enemy are near-numberless zombies. I can also understand a reluctance to send the Dothraki off into the dark when nobody at Winterfell could really be sure of the full extent of the horrors at the Night King’s disposal – who knows what gristly fate may have befallen detachments sent out into that icy, impenetrable night? Honestly while it may have been a bit wasteful, on the ground I think the best use of the Dothraki besides some scouting would have simply been to dismount them and augment the castle garrison.

If Napoleon would have been pissed at our heroes’ use of cavalry, as an artillery officer he’d have been even more incensed at the use of the siege equipment. In another utterly incomprehensible decision, the Good Guys decide to deploy their indirect fire weapons – trebuchets and catapults – right in front of their infantry battle line. Thanks to this they are literally able to launch just one salvo in support of the doomed Dothraki charge, before being abandoned and overrun. I’m genuinely confident that a ten-year-old child would have suggested the more obvious, superior tactic – site them inside Winterfell’s walls and have them launch their rocks over the parapets.

Riposte: There’s not much that can be said in defence of this, besides the fact that I don’t think they’d have been able to fit all of the siege weapons and equipment inside Winterfell’s courtyard. They’d still have been better placed behind the fire trench though. Speaking of…

The fire trench was pretty cool. It could’ve been wider and deeper though, and they could’ve set up more spike/fire pits further out, as well as bonfires to illuminate the approach of the undead. Even more egregiously though, I can’t comprehend why they didn’t deploy their battle line behind it instead of in front of it. At a stroke they’d have made the assault more perilous and removed the fact that it’s almost impossible for any of them to retreat to the castle (except the heroes though, conveniently).

Repost: A lot of the criticisms of the defence of Winterfell assume an ideal situation where the garrison has all the time and resources in the world at their disposal. In reality, from what we can glean in the two preceding episodes they were pretty strapped for supplies and working flat out on a number of fronts, especially the construction of the trench and dragonglass weaponry. I think it’s unrealistic to expect them to have all of the potential defences they could have utilised set up. That doesn’t excuse their deployment though. Also well done to the Unsullied for fighting like actual soldiers and not one v. one fantasy herowarriorchampions. 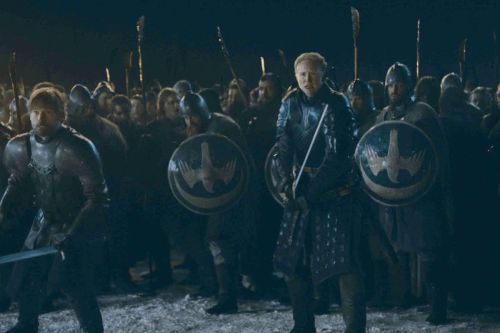 Heroes, and don’t they just know it?

The undead are literally at the gates, but they’ve inexplicably paused. What do you do? Stop shooting them, apparently? Until they decide to swarm the fire trench, Soviet-style, of course. On the face of it this looks like another act of base stupidity from the garrison.

Riposte: Have you ever fought a horde of zombies with nothing but a bow and arrows? No, you haven’t. Beyond “undead” nobody at Winterfell really has a good grasp on what motivates the Night King or how the specifics of his necromantic army works. If they all suddenly freeze up, an adrenaline-addled mind in the midst of a battle may be as inclined to think “oh hey maybe that’s them all about to collapse” as it would “keep shooting!” Perhaps shooting them if they’ve abruptly stopped would trigger another attack? It’s all a bit illogical, but there’s nowhere quite as illogical as a combat situation. Not shooting was dumb in retrospect, but I can see why it might have happened.

As long as a sizable portion of the garrison was still outside the castle walls, it actually made military sense to keep the main gate (as the only means of communication), open. Not having the walls manned until the trench was on fire, however, didn’t.

The Good Guys knew the Night King had at least one Zombie Giant at his disposal. How is it going to get into the castle? Through the gate, obviously! And how do you kill giants? With spears or pikes, as demonstrated by one R. Bolton. The defenders of Winterfell certainly have spears, but why form a reserve behind the gates when you can rely on a young child to die while saving the day?

Riposte: I can’t think of one for this. Keep a spear reserve, people. 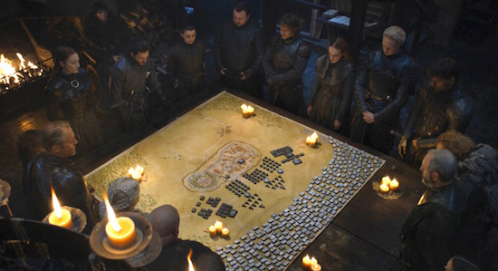 I love that they felt the need to represent the undead horde with an actual tonne of blocks. Like they couldn’t just say “they’re an unorganised mass occupying half the battlefield.” Nope, hundreds of blocks so we know how many blocks Winterfell has in its strategy closet!

This is yet another obvious one. Johnny Snowgaryen and the former Mrs Drogo have a two-to-one dragon air superiority advantage. If the Night King tries to counter that personally, they can gang up and quite possibly take him out, if he doesn’t they have a free napalm bombing run on a very, very target-rich environment. Instead they decide to either get lost in the snowstorm, separate and/or fly so close to the ground that dead people can perform mid-flight boarding actions.

Riposte: I don’t think it’s ever been explained just how dragon fire works in the show, but presumably they don’t have an unlimited amount – I imagine spewing fire is draining, and the drakes are required to rest and/or eat after a prolonged bout of immolating. In that sense no, the dragons couldn’t just have burned up the whole zombie horde on their own. Jon and Danny’s relative incompetence during the battle can also probably be quite safely ascribed to the snowstorm/night conditions, desperation, the split desire to support the castle but also take out the Night King and, in Jon’s case, his lack of familiarity with dragons. I don’t think either of them behaved hugely out of character.

That last point really sums up my general thinking. Yes, the tactics and general battle scenes didn’t really make much sense. Often, however, some benighted armchair generals (myself included) don’t pause to consider the reality of the situation on the ground, where less-than-ideal conditions, nerves, basic human error and a total lack of hindsight can change things profoundly.

Episode 3 was, for me, neither the worst battle we’ve seen in Game of Throne, or the best (my personal least-favourite was the battle of the Bastards, with its stupid pike envelopment thingy and literal Here Come the Cavalry. Conversely I think the Dothraki ambush of Jaime’s Lannister convoy got almost everything right). Speaking personally, I was able to suspend enough belief to actually really enjoy it (and yes, I could make out the characters most of the time). The biggest shame for me was the abrupt death of the Night King and, with him, the Big Bad they’d literally been building up for the entire series.

The night is dark, but apparently no longer full of terrors.

Tagged as fantasy, game of throne, got, medieval, military history, the battle of winterfell, war, winterfell